There is no shortage of incredible stargazing around New Zealand.

With a population of just about five million, we don’t have a lot of light pollution compared with other countries. The bright lights of cities and towns, with their homes, streetlights, and even the lights on football pitches, make it much harder to see the stars at night. It’s the same with the moon; the best stargazing is during a new moon, where there is no moonlight to dim the stars.

Growing up on the urban east coast of America, my memories of stargazing are maybe seeing a handful of stars at night. Not a lot, that’s for sure. When I moved to New Zealand, I remember camping and waking up to see so many stars that they didn’t look real, like someone had painted the sky. When you’ve grown up in cities, and you come out into the wilderness and see the night sky properly for the first time, it’s really powerful.

You can almost always clearly see the Milky Way here and many other notable constellations that can only be seen in the southern hemisphere, including the Southern Cross to the Magellanic Clouds. 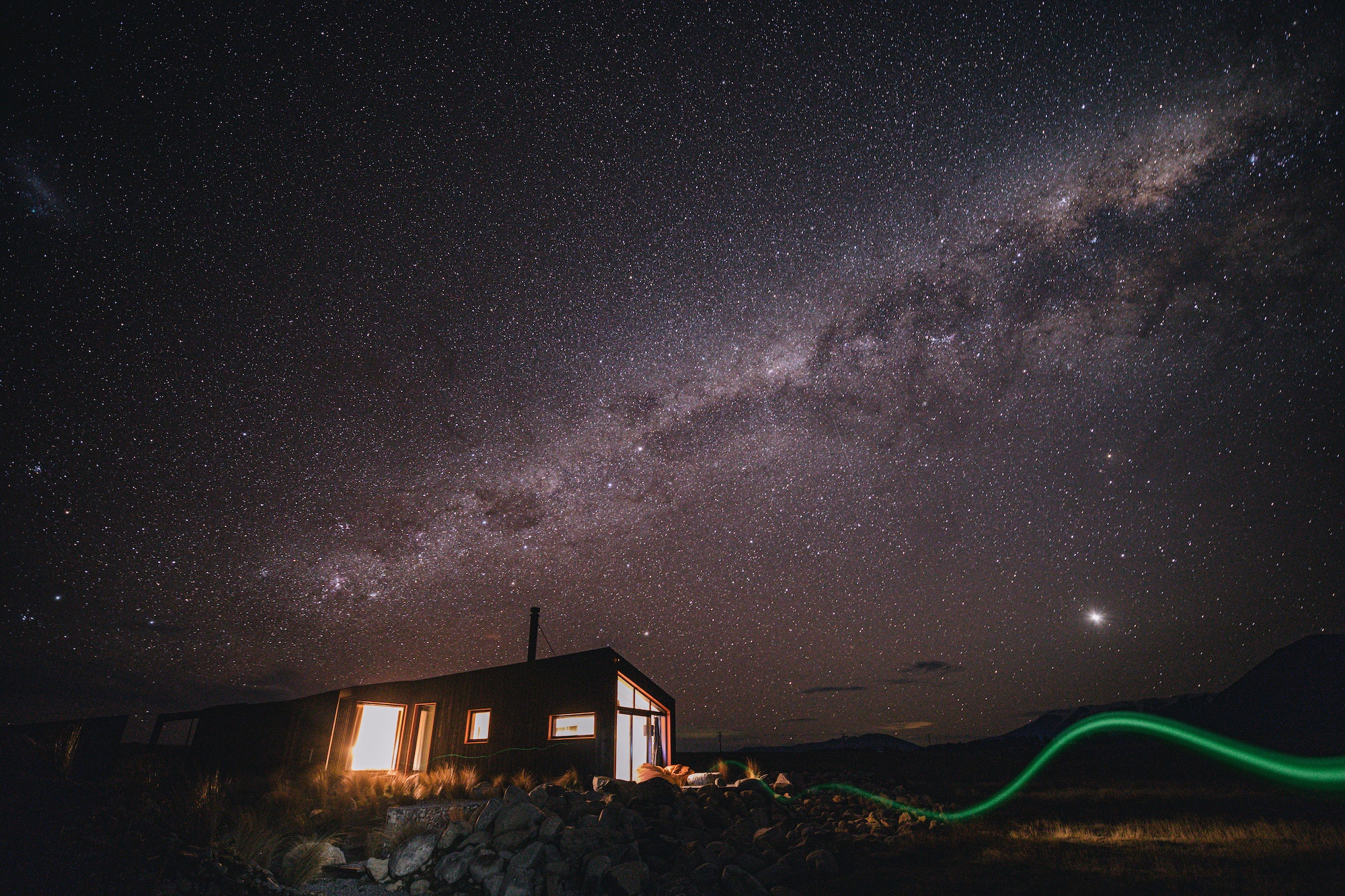 The green light in the shot is from my head torch as I moved in front of the camera during the long exposure. 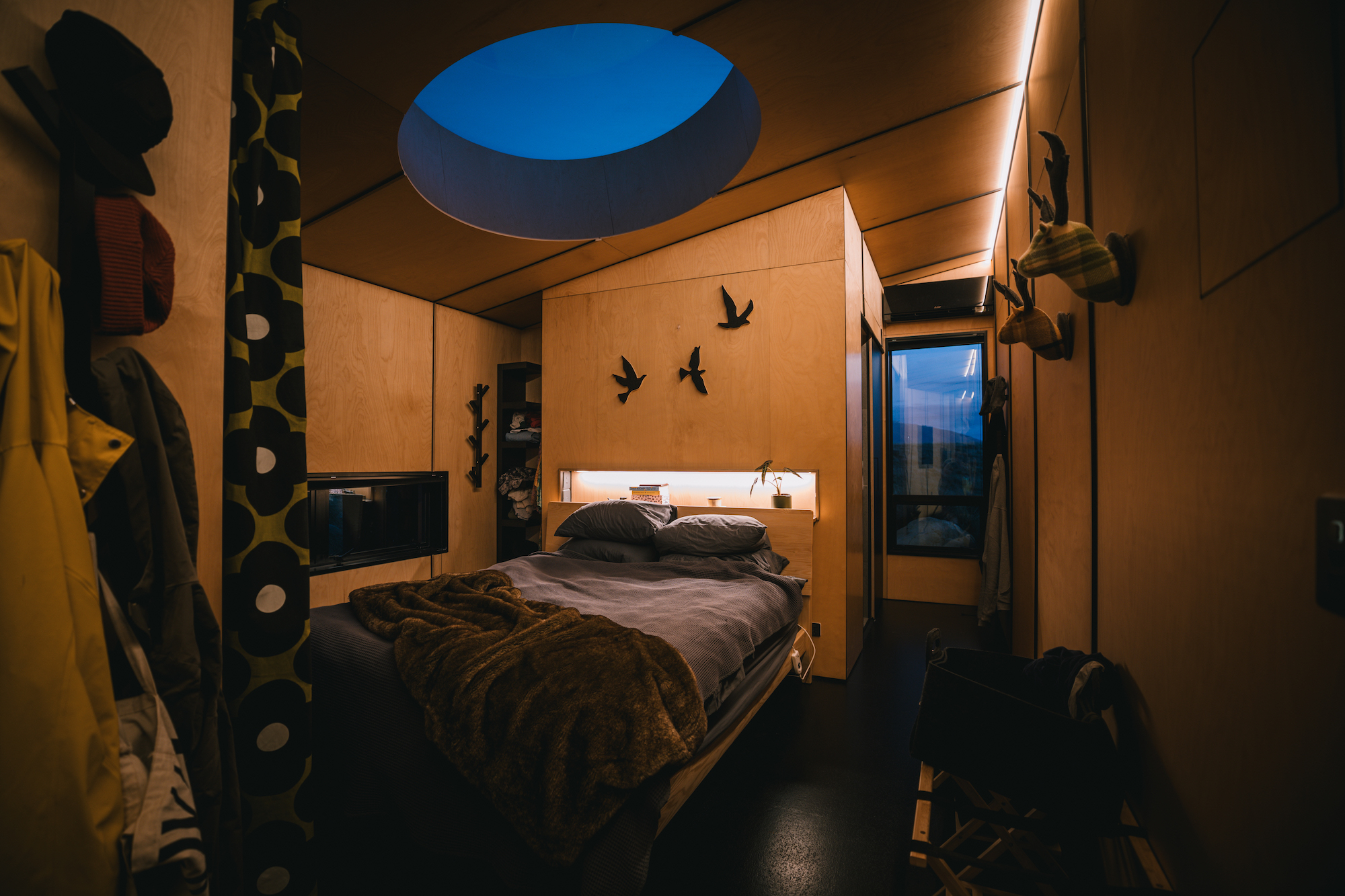 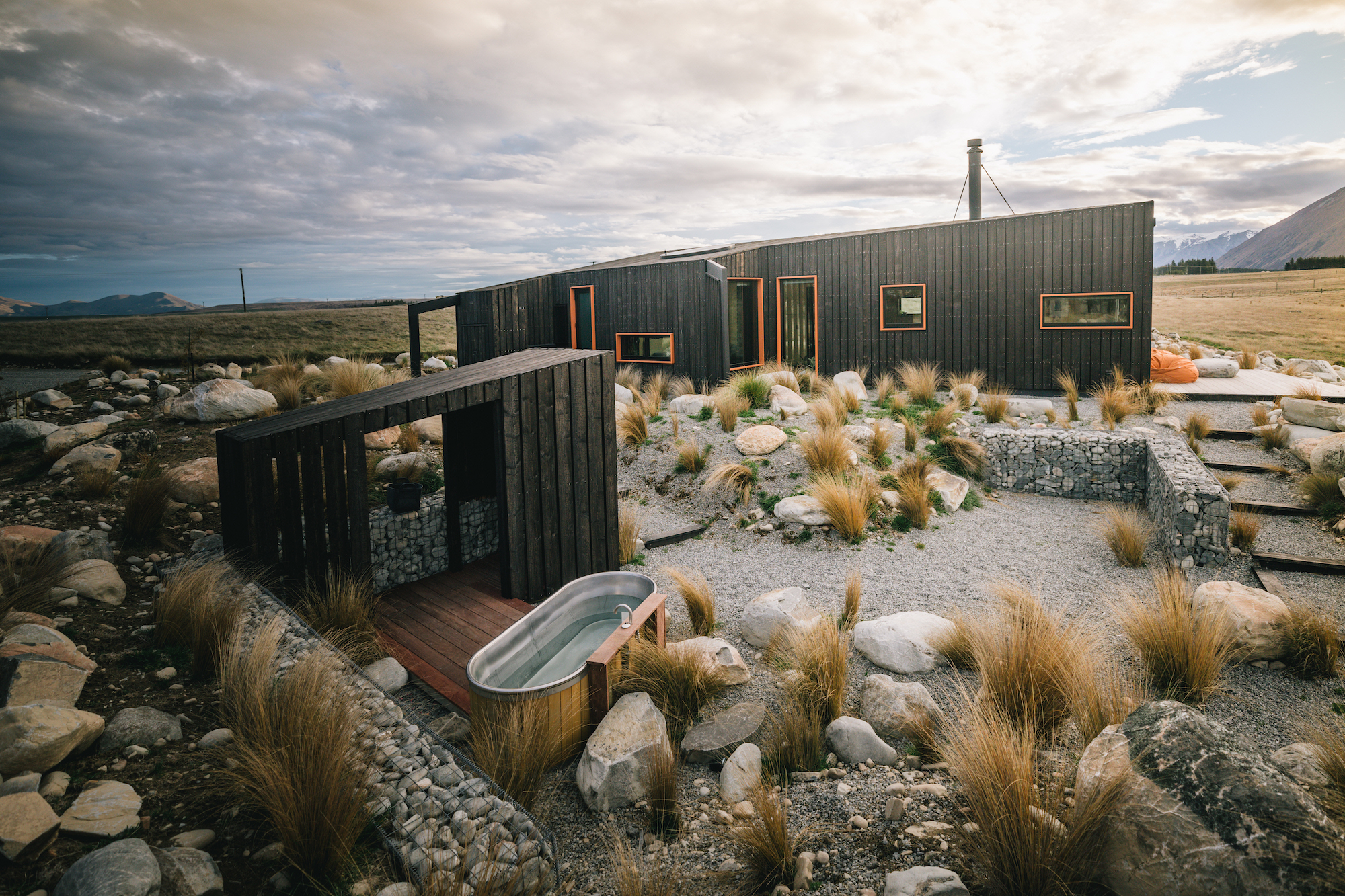 And while there generally is incredible stargazing around New Zealand, the best place by far is in the center of the South Island.

The Mackenzie Region is home to the largest dark sky reserve in the Southern Hemisphere. A decade ago, 4,3oo square kilometers were declared protected by the Aoraki Mackenzie International Dark Sky Reserve, which strictly controls light pollution in the area. One of only eight dark sky reserves in the world, it’s also home to one of New Zealand’s most famous astronomical research facilities, the Mt. John Observatory.

You’ll notice in towns like Tekapo that the street lights are dull orange and point downwards; one of the key ways they limit light pollution from blocking out the dark night skies. 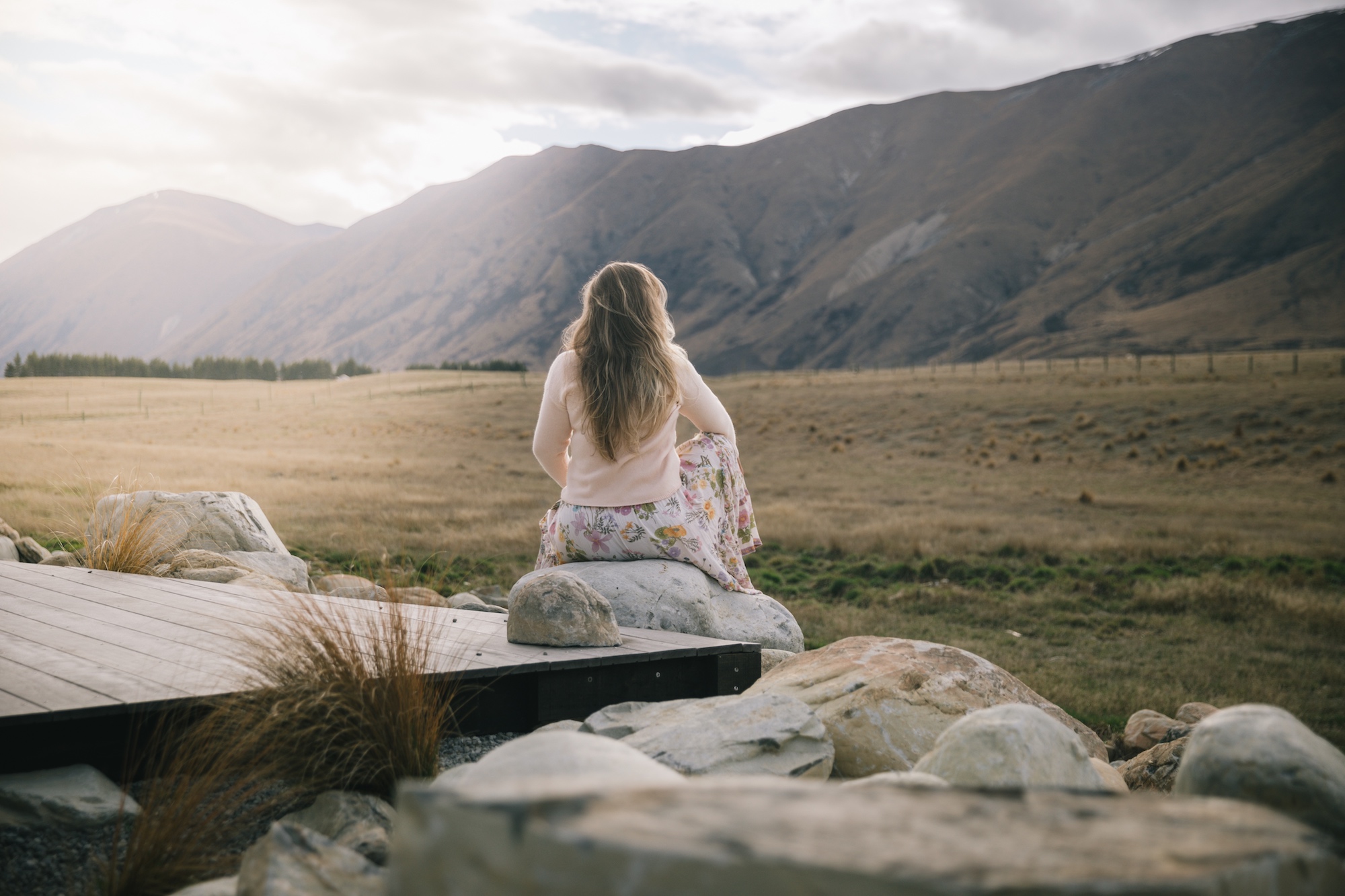 I am wearing the merino wool jumper by eco-friendly kiwi brand Allbirds. This area is home to many merino sheep stations. 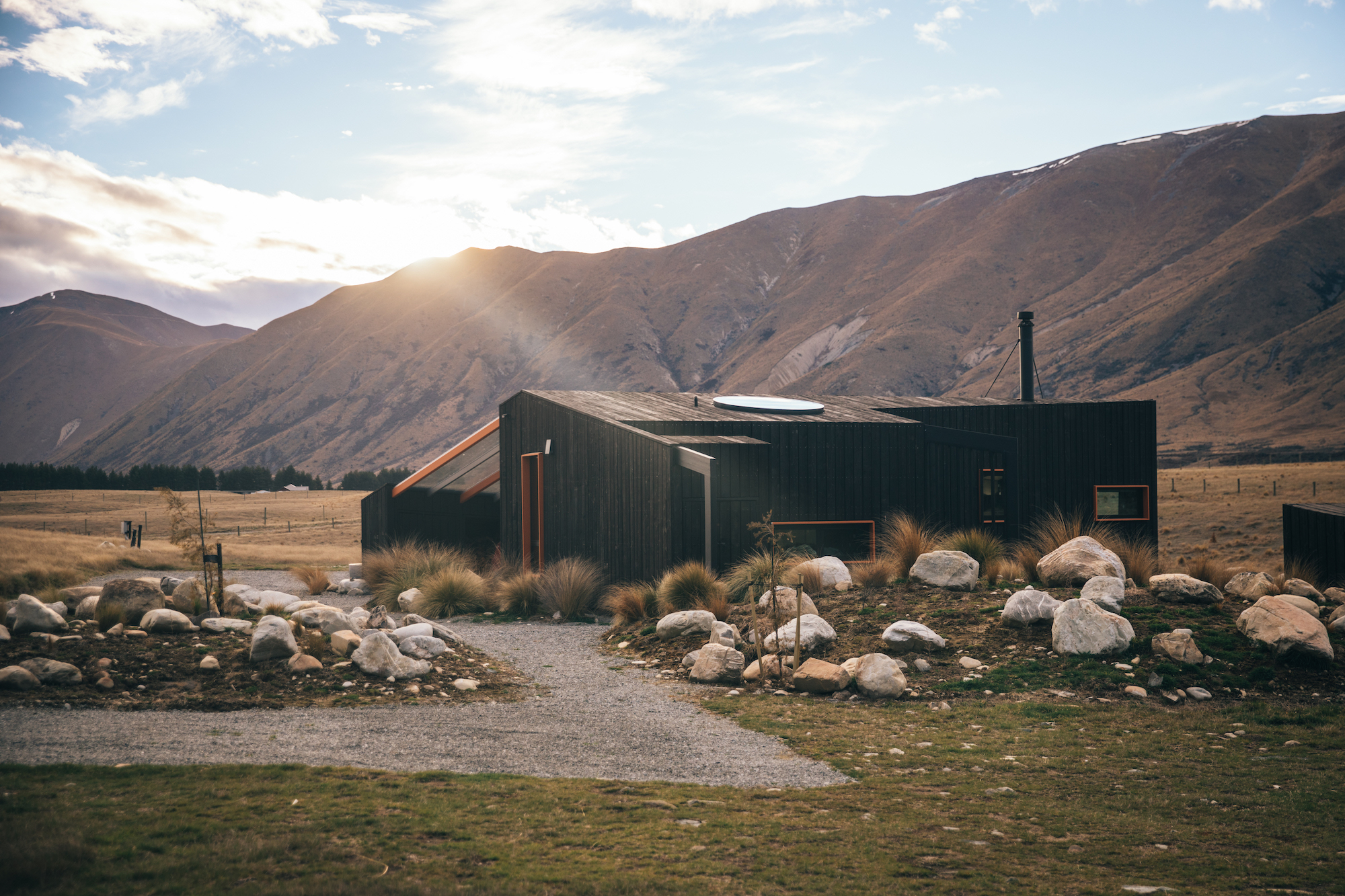 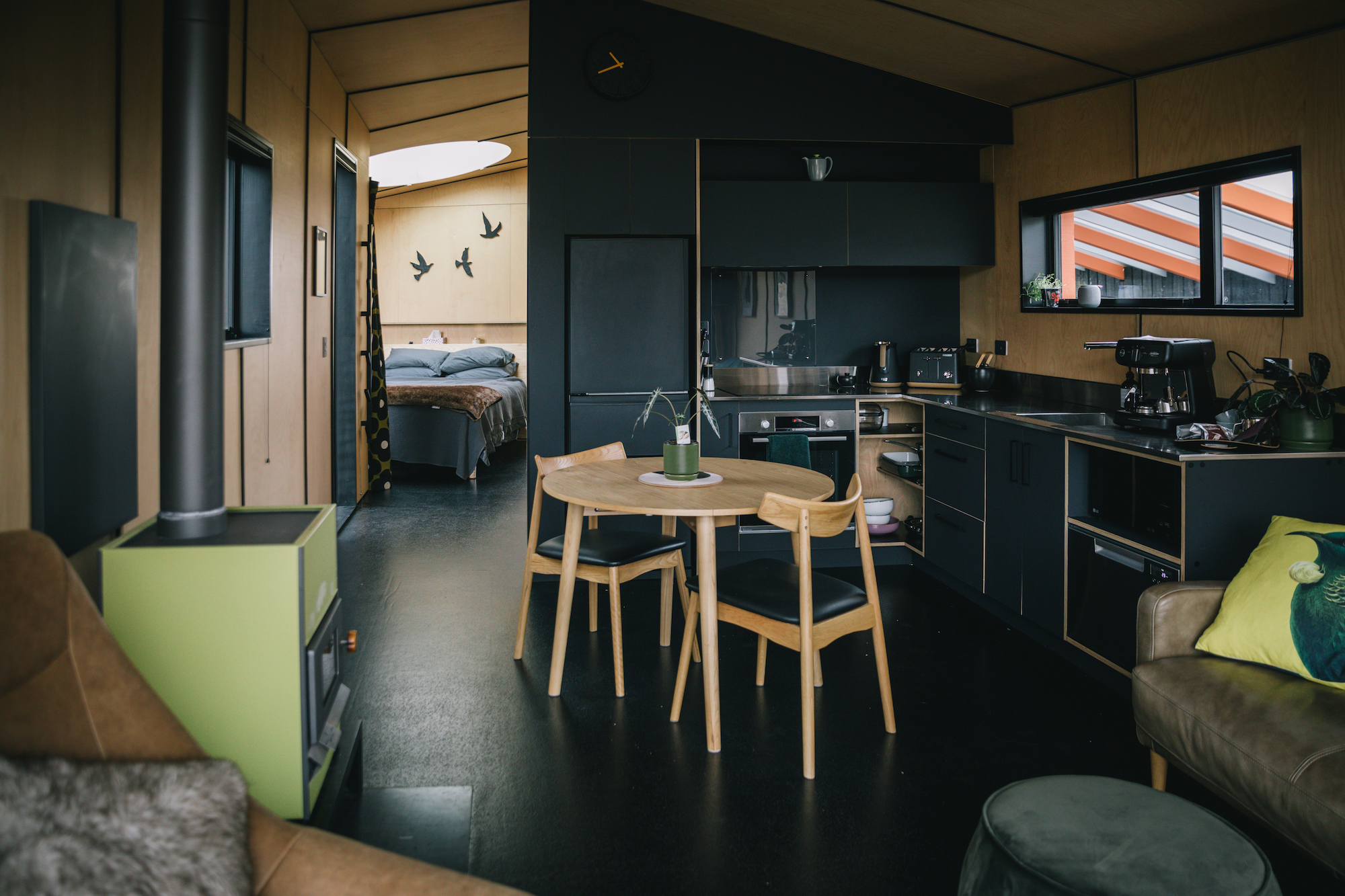 Nearby Tekapo is one of my favorite small South Island towns – Twizel. Or if you’re a nerd like me, Gondor. Many of the battle scenes from the Lord of the Rings’ third movie, The Return of the King, were filmed here. And just about every horse and human for a hundred miles were extras too.

Twizel is one of my favorite places, especially around the back towards the Ben Ohau Ranges. It feels like Middle Earth here, with big epic skies and tussocked mountains. Lots of merino sheep. I find peace in open spaces like the Mackenzie Country, which gives my brain a bit of a breather.

When my massage therapist/friend Liz in Christchurch mentioned that she and her partner had just built a design cabin out near Twizel and offered me to stay, I jumped at the chance. Pre-breakup, my partner and I at the time were on the rocks fighting a lot, and I combined it with a trip to see my friends in Wanaka. It was nice to get away and do some (painful) reflecting and writing. 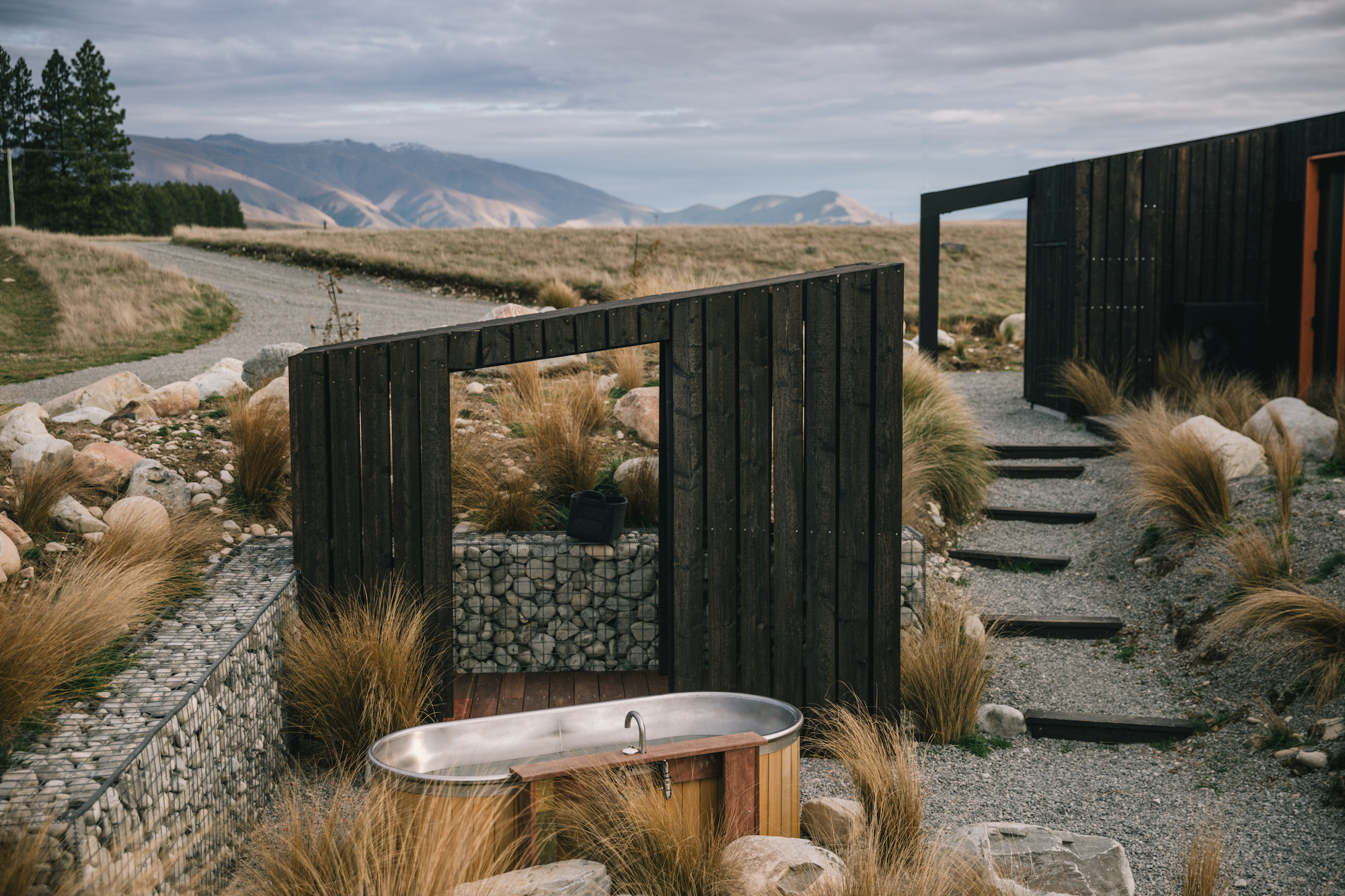 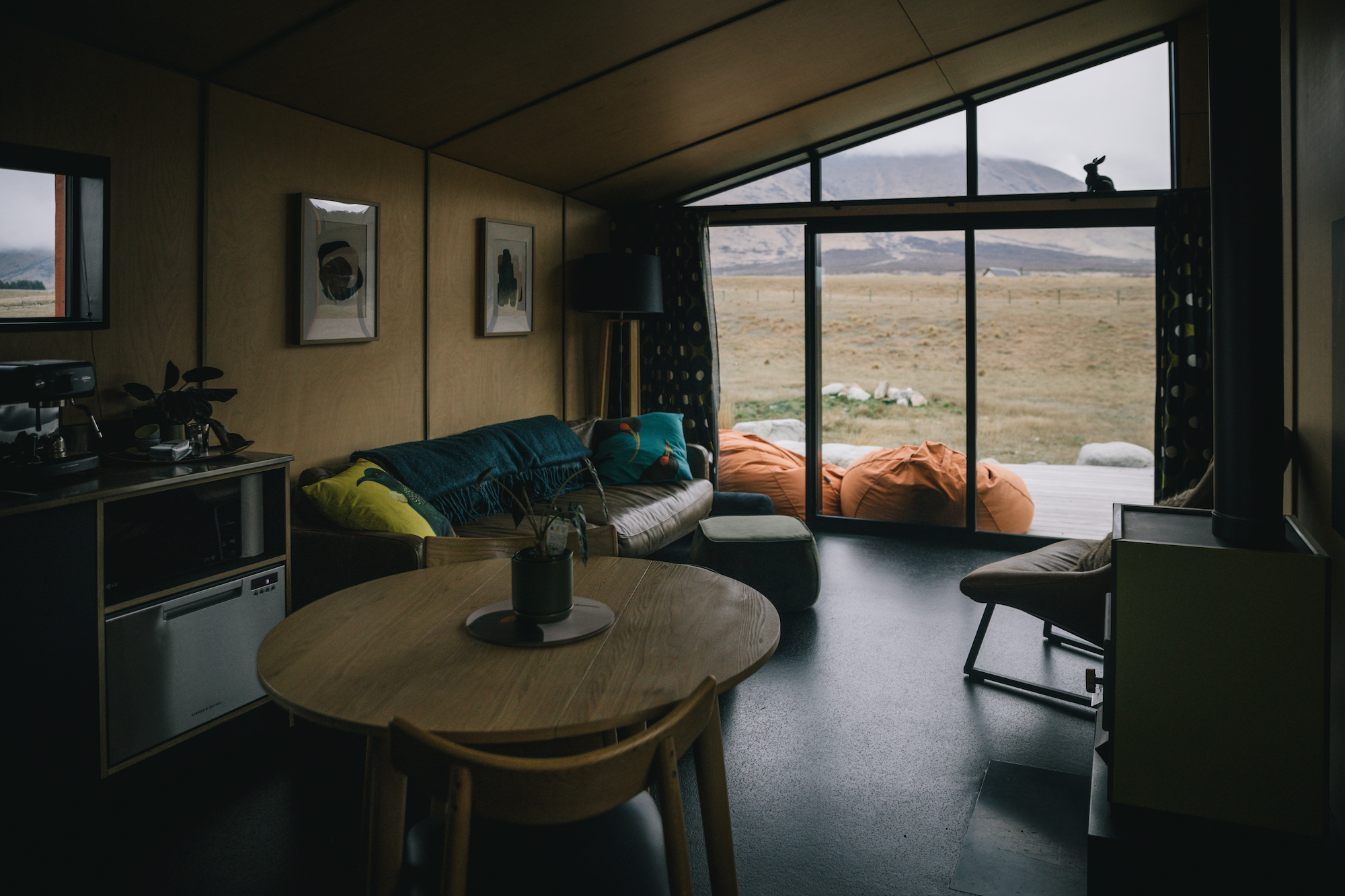 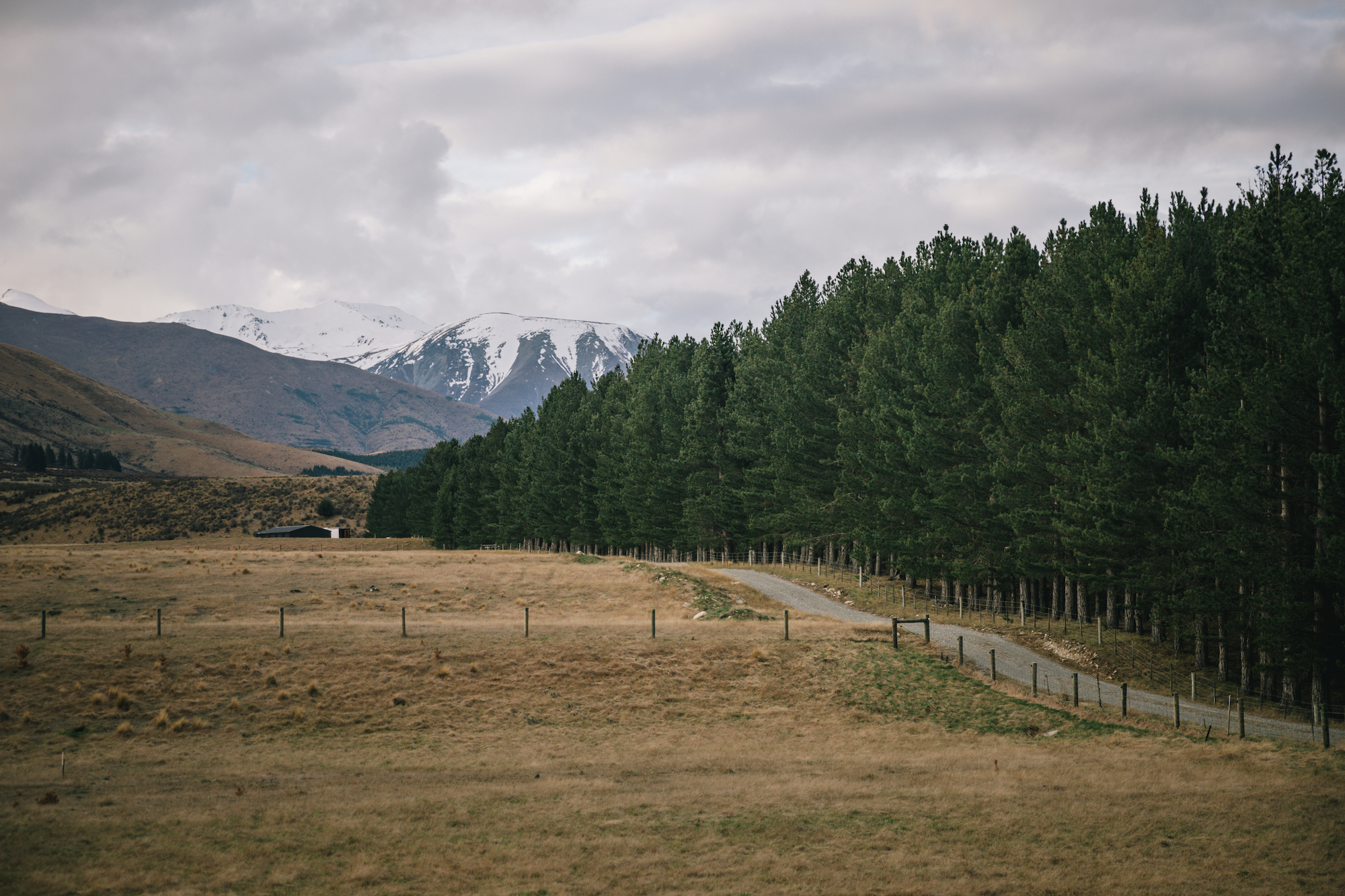 I’ve watched the growth around Twizel with keen interest over the years. When I first moved to the South Island, it was very small, with many baches (holiday homes) in town.

In recent years, more and more cabins and houses are being built around Twizel on lifestyle blocks. Lifestyle blocks are not something I had ever heard of before moving here. But from my understanding, it’s a block of land bigger than a standard residential plot but smaller than a farm. Generally, you don’t see your neighbor’s houses; but they aren’t that far away, and you probably have to mow your lawn with a riding mower. Google told me the average lifestyle block is four hectares or 10 acres. Either way, I can’t afford one anytime soon.

Kiwis, I know I can count on you to correct me if I’m wrong. 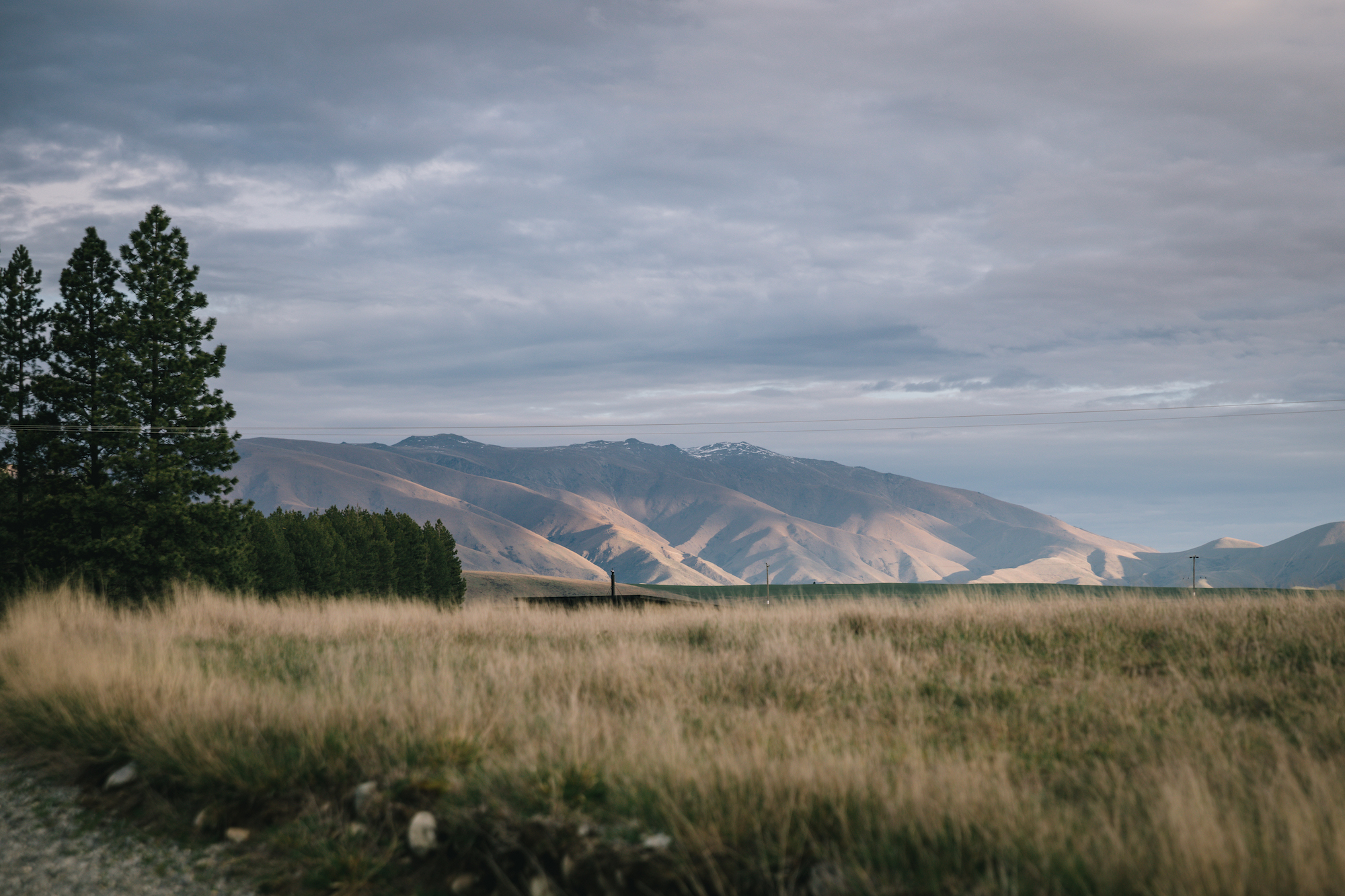 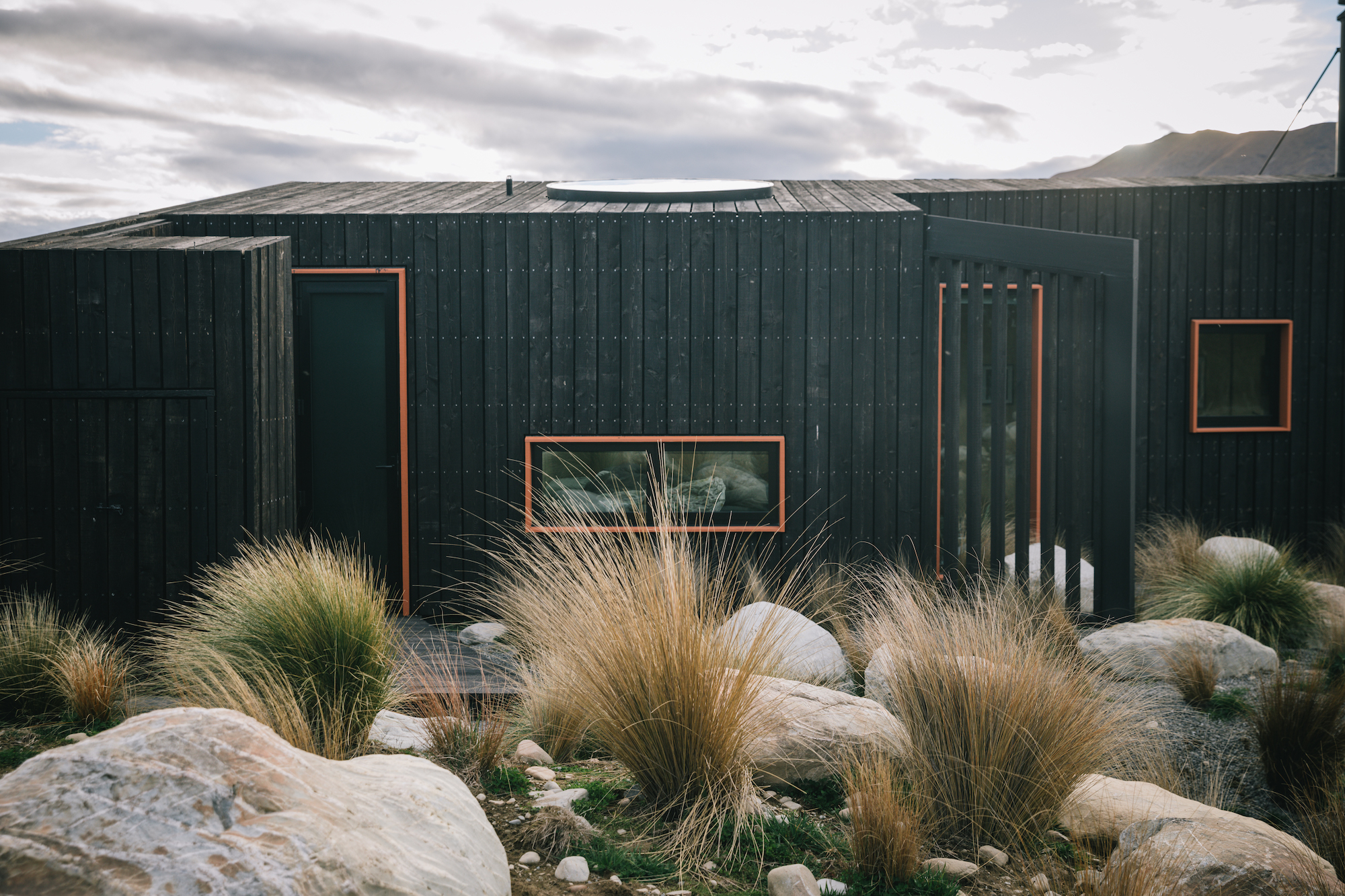 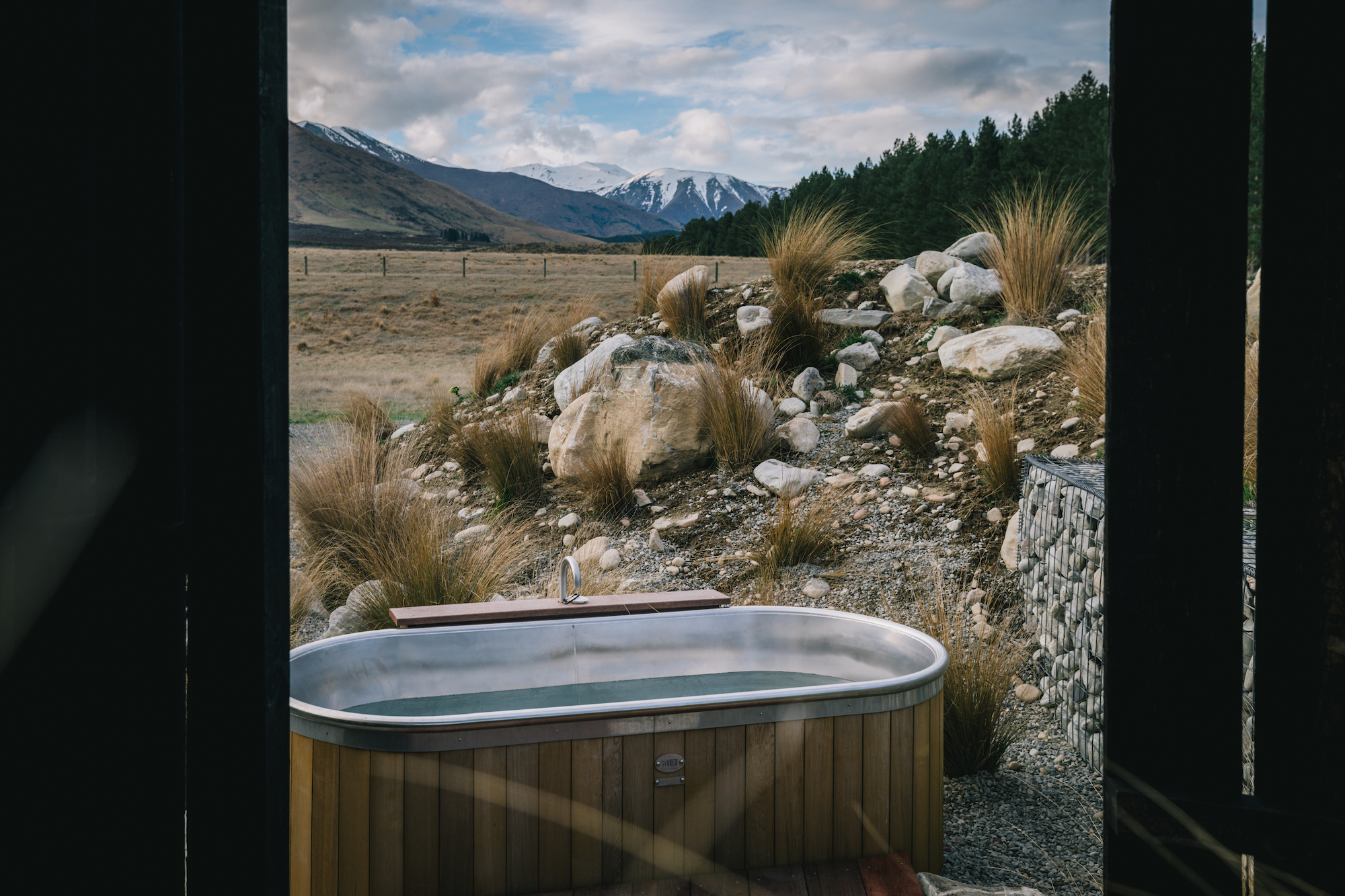 Why am I yarning about lifestyle blocks? Well, many of the new houses built around the outskirts of Twizel are on lifestyle blocks, including my friend Liz’s new place – Skylark Cabin.

Staying in such a cool design house here to go off the grid and write was so cool! With a huge round skylight over the bed made for stargazing – I found myself popping my glasses on repeatedly during the night to gaze at the Milky Way (thanks insomnia).

I love staying in thoughtful, creative spaces. And I love to stay in architecturally creative and modern spaces that still feel welcoming and cozy. It’s easy to build a cookie-cutter house here in New Zealand, especially with the current building boom. But to craft a place that reflects the story of the land, the heritage of the area, and features the best of the best, well, now that’s hard.

Skylark Cabin definitely ticked all those boxes and more – no wonder it’s always booked out! Plan ahead, team! 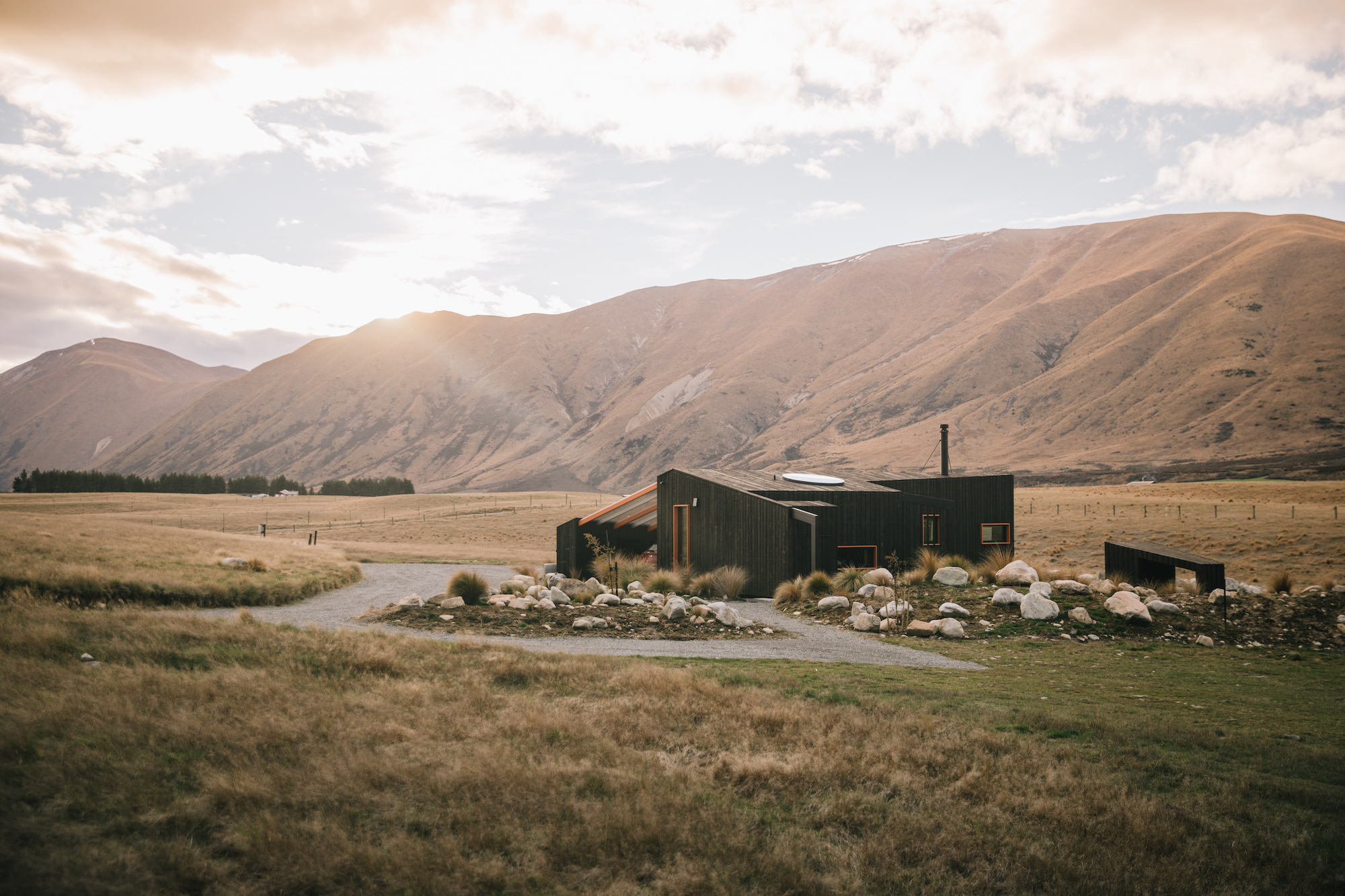 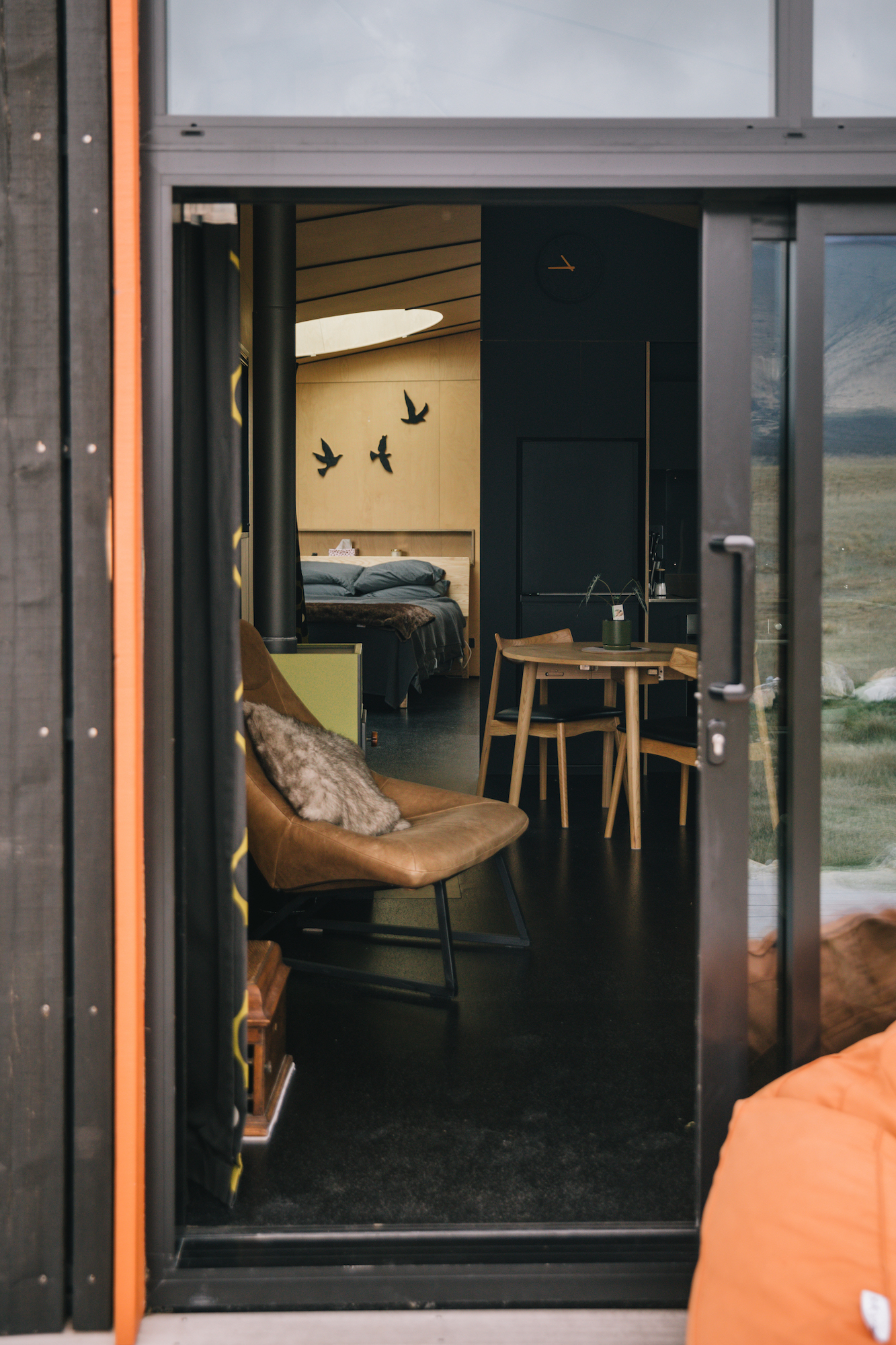 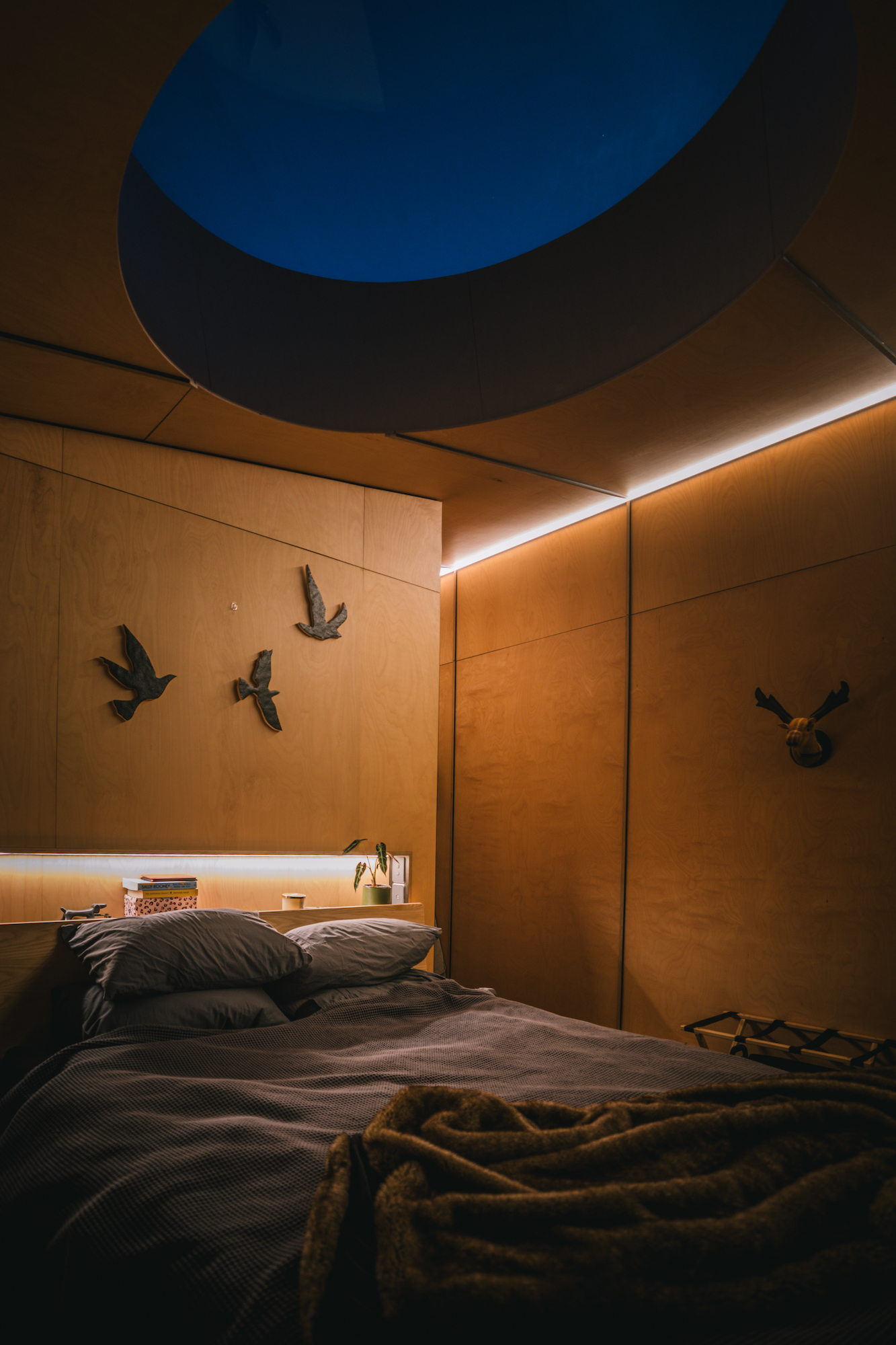 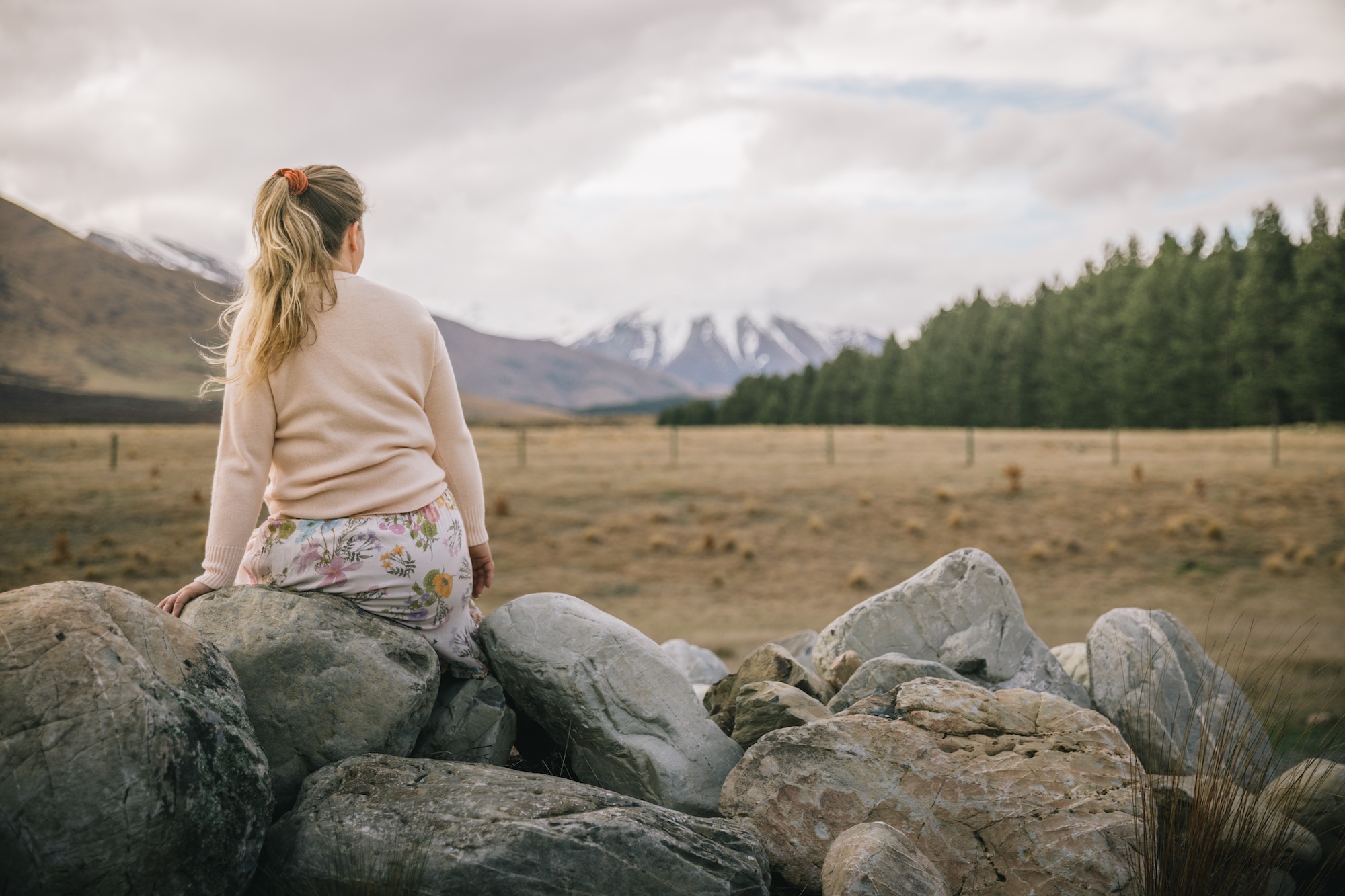 Nestled gently amongst the tussocks against the backdrop of the Ben Ohau ranges, Skylark couldn’t be more picturesque. Built in 2020, Skylark Cabin was thoughtfully designed by award-winning architect Barry Connor. His style allows you to make the most of the mighty landscape of the Mackenzie Basin.

High and dry, this part of New Zealand often gets the most snow. It’s not unusual for the area to be blanketed white come wintertime. Think big open skies, epic sunsets, freezing winters, and piping hot summers. The Mackenzie area is bright, colorful, and extreme in every way.

When I stay at a place like the Skylark Cabin, I like not to leave, so I’ll bring all the food I need for a few days. That way, I can make the most of the epic location and modern kitchen. Usually, I stop in the Four Square in Twizel to grab what I need, but here are some spots I find myself returning to again and again. 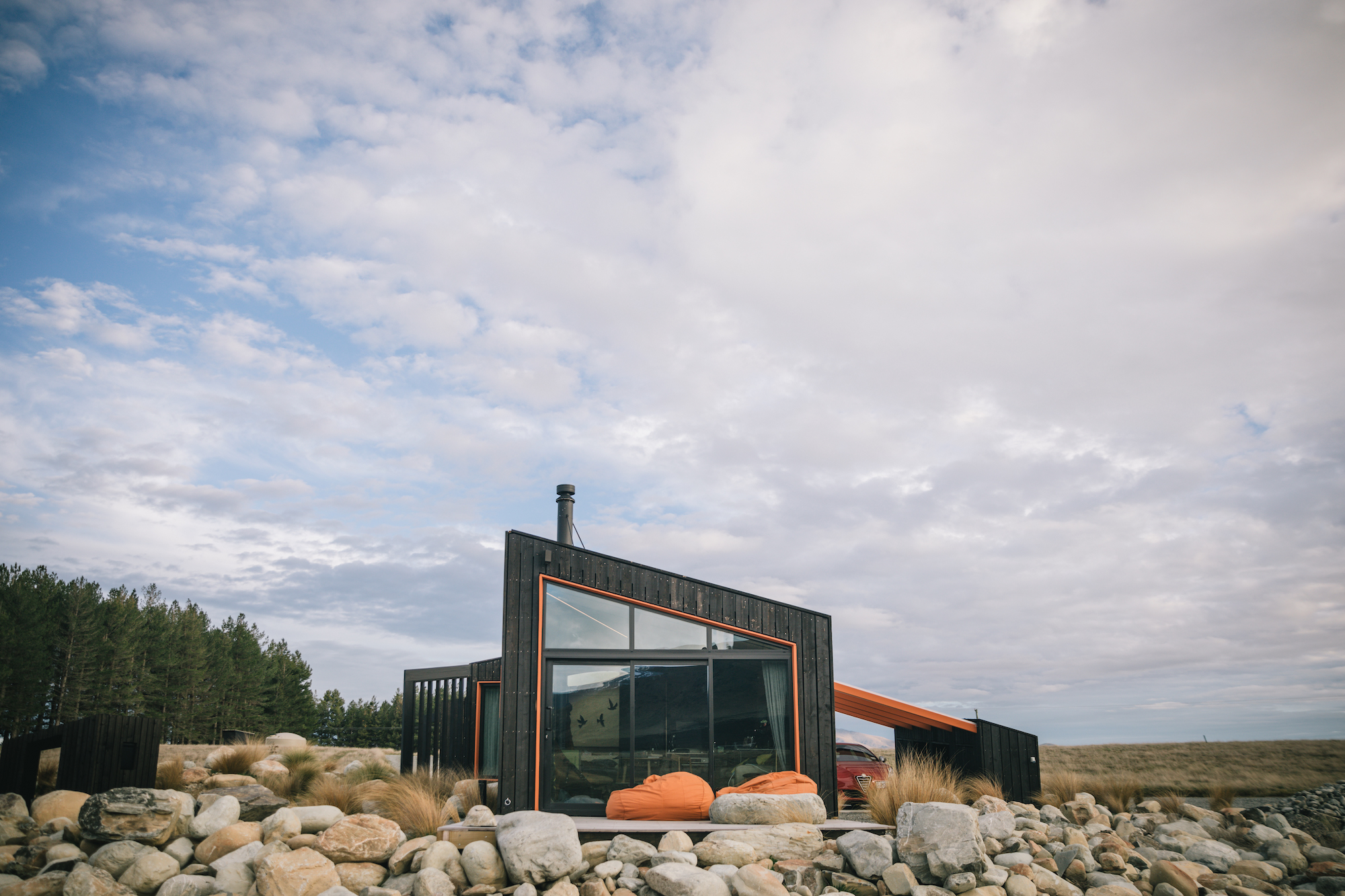 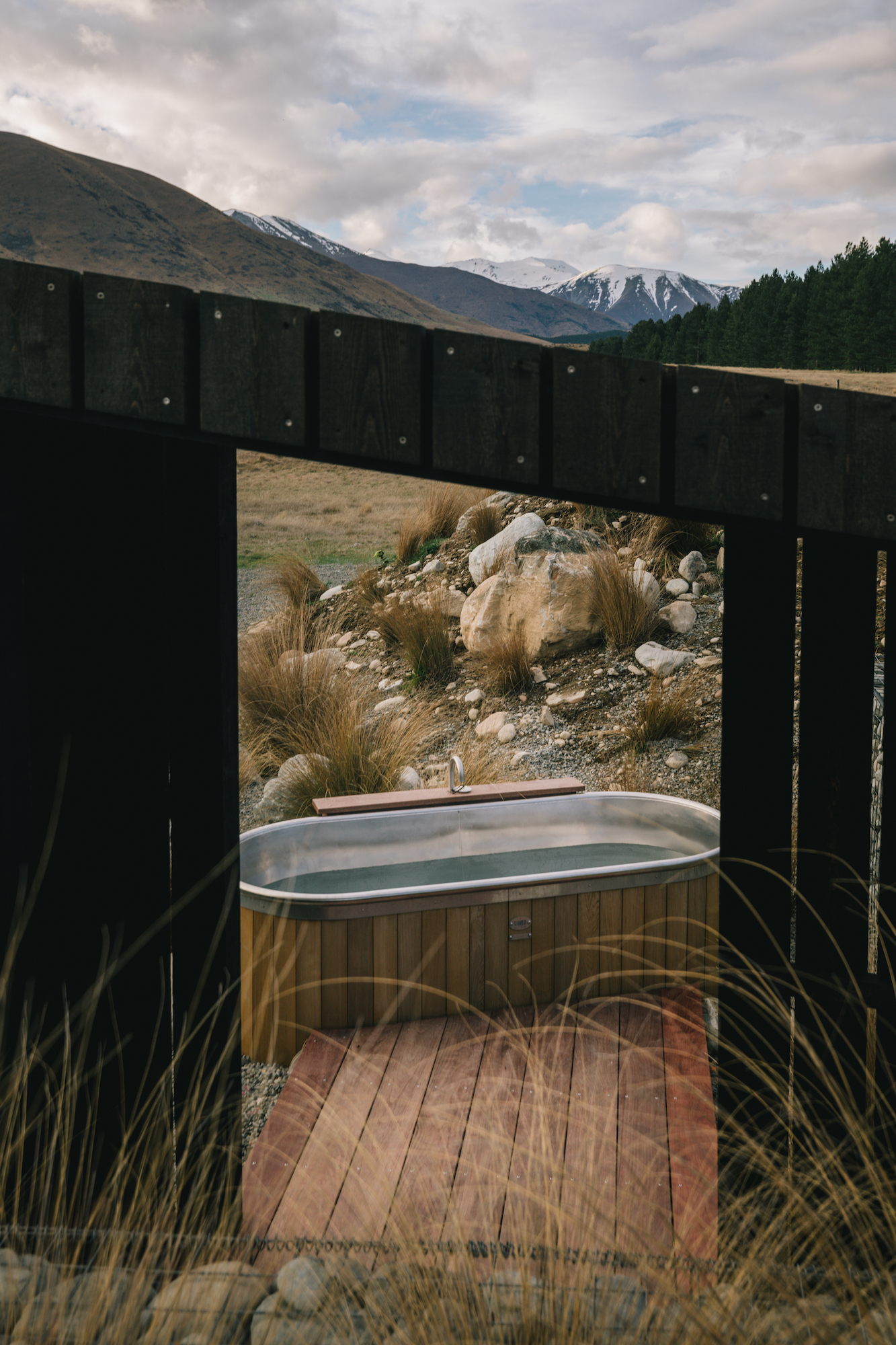 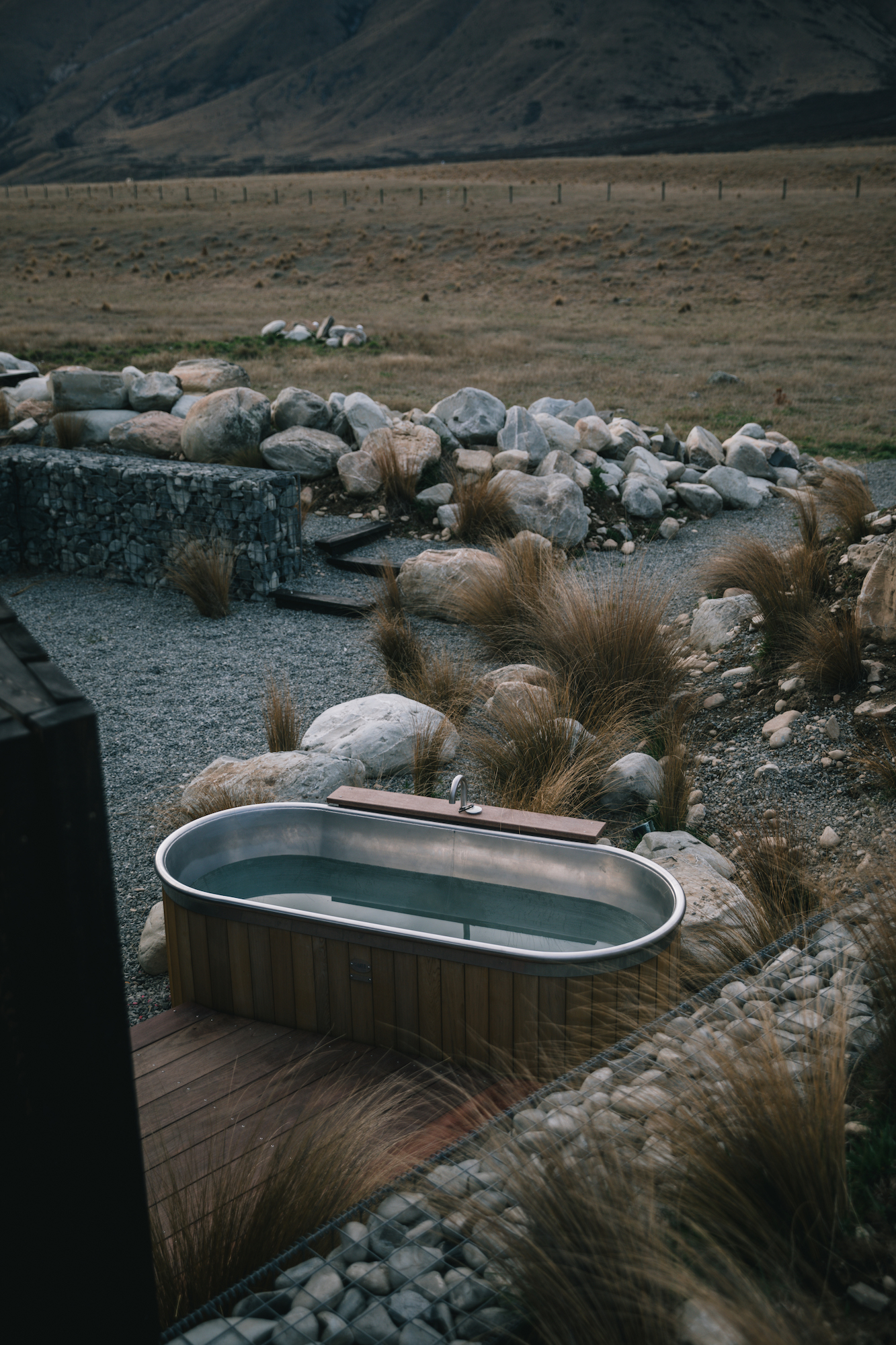 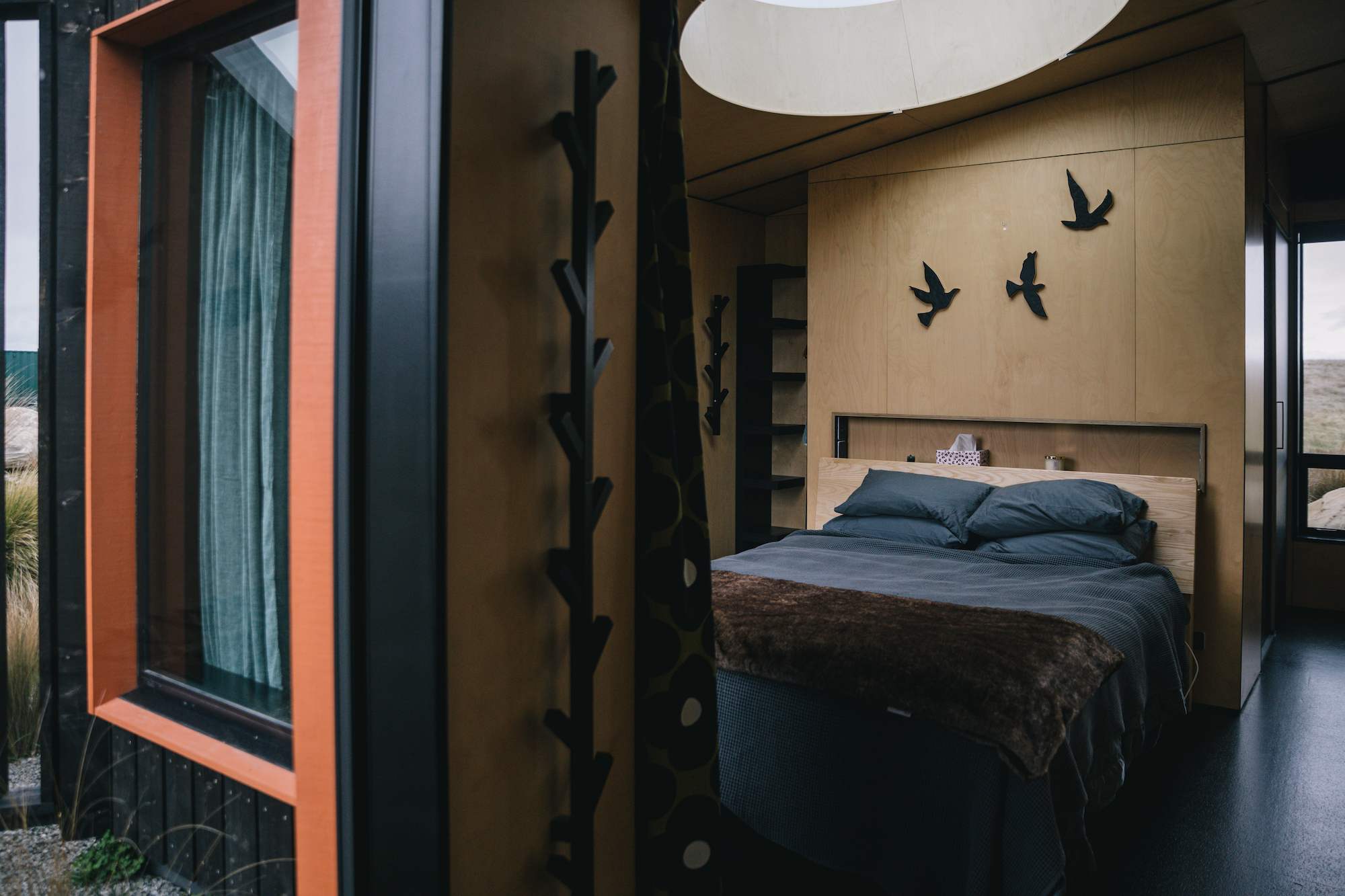 When I first stepped inside Skylark Cabin, I felt my body heave a sigh of relief. I didn’t realize I was so stressed and wound up. It was just so lovely, cozy, and the perfect size. It was after nightfall, so I didn’t have the lay of the land yet. Getting the fire going, I began to settle in. I made some fresh pasta, threw on my pajamas, and snuggled up on the sofa to watch a Dolly Parton documentary. Heaven.

Outside they had one of the fantastic Stoked hot tubs, which you bet I will be budgeting into my mortgage one day. There is nothing quite so wonderful for the soul than soaking in an outdoor bath in a beautiful place.

Unless you soak in the spa at night under the stars. 10/10 I would recommend. 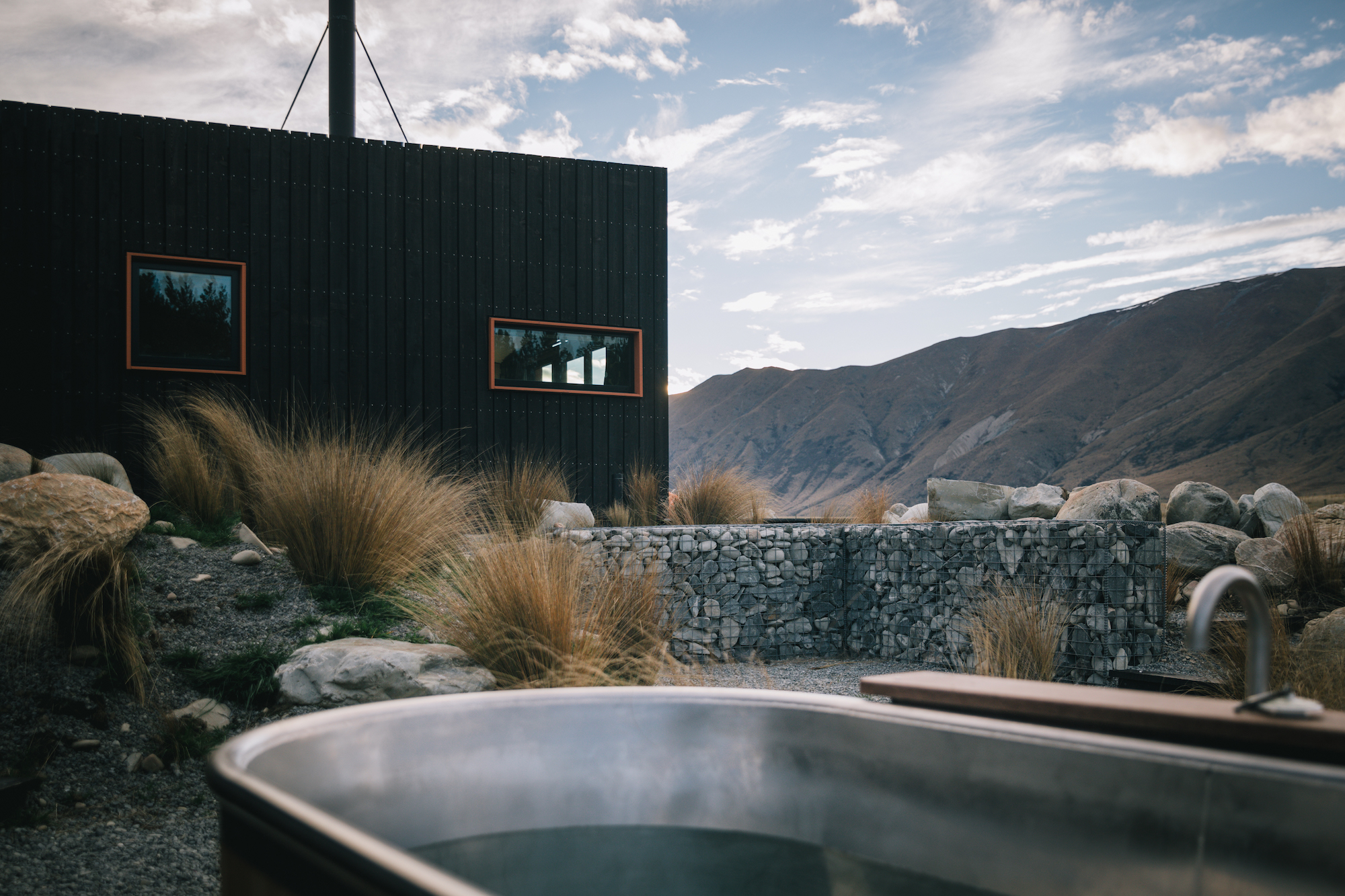 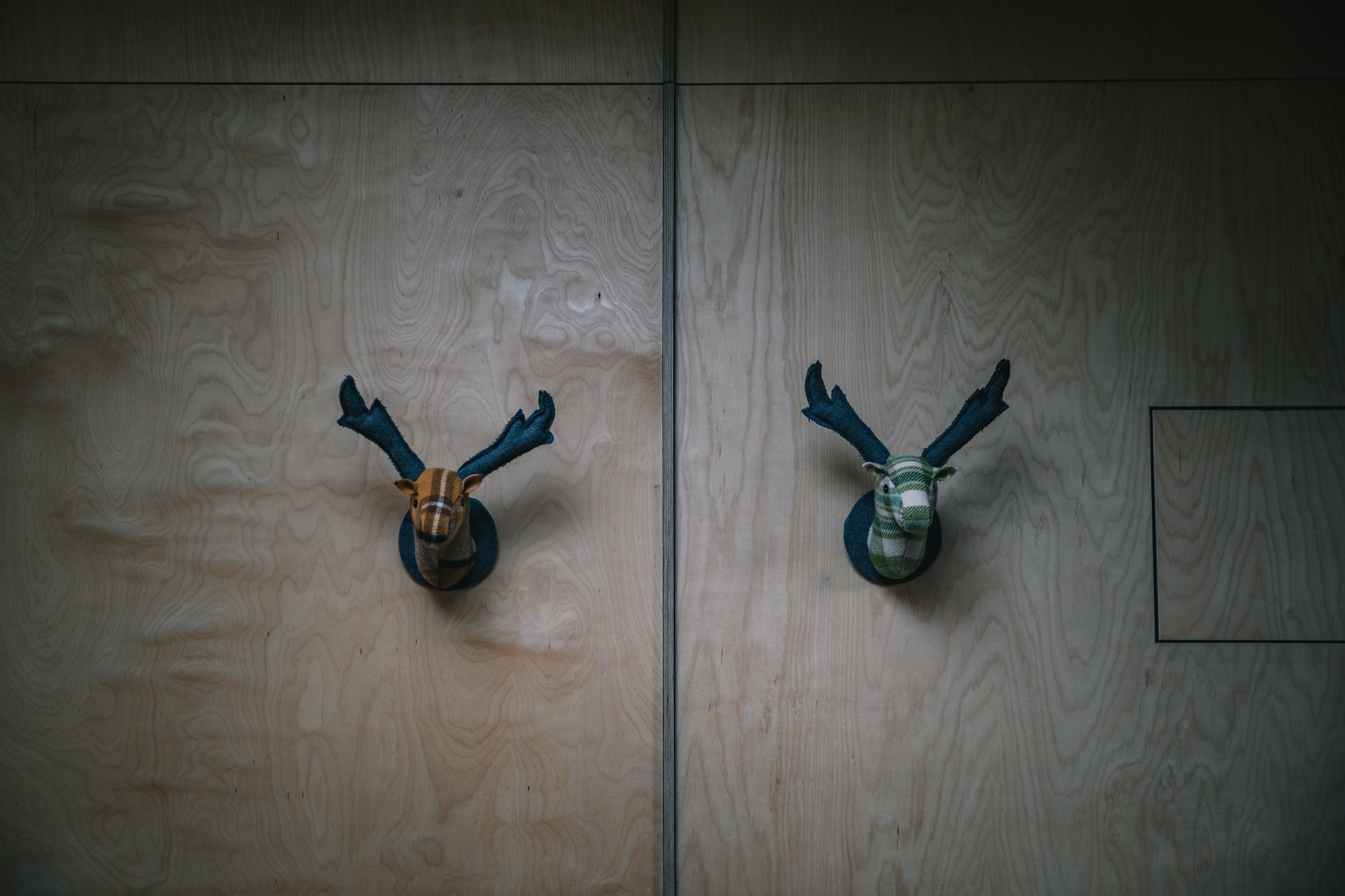 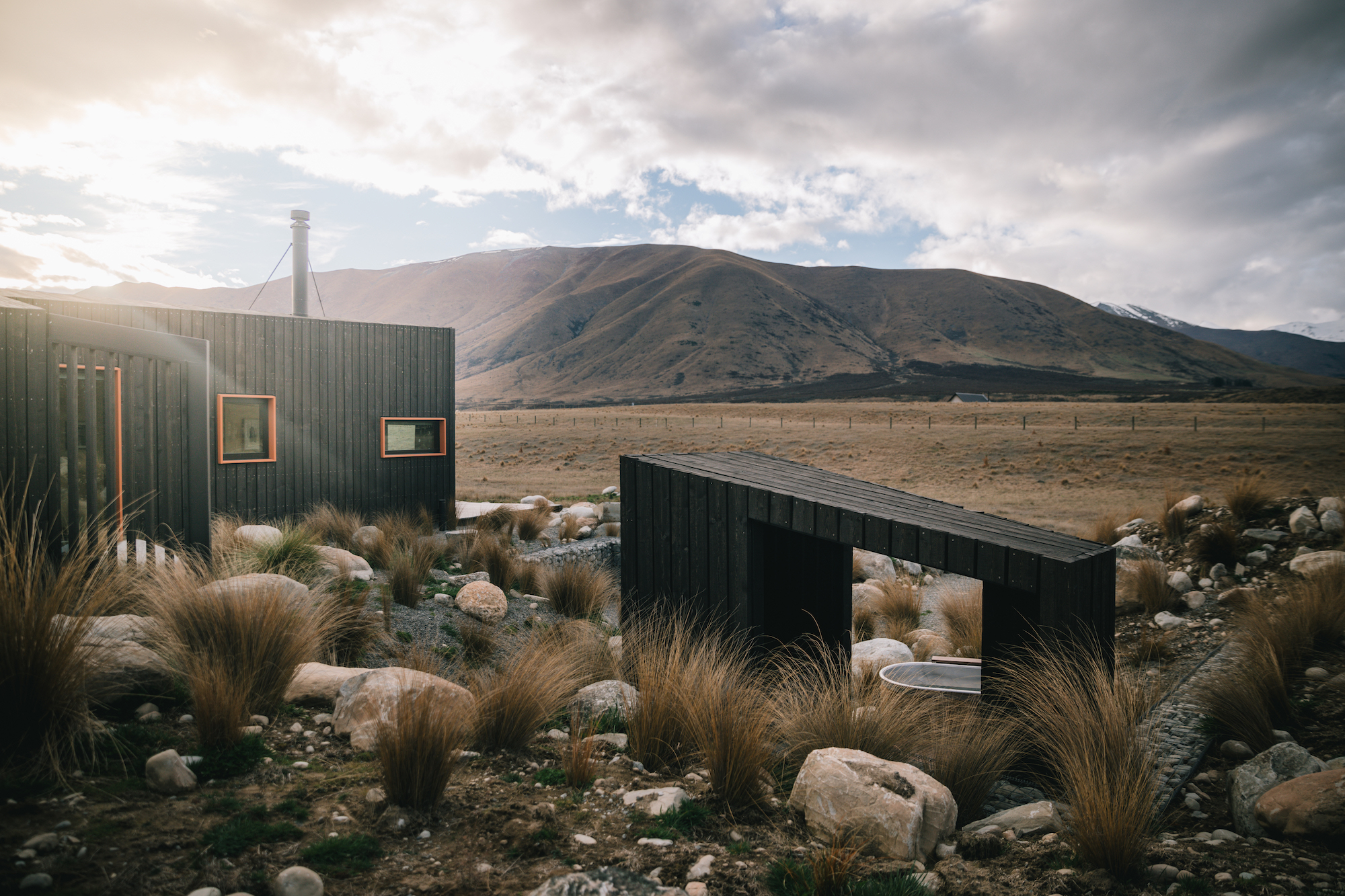 I spent four days relaxing at Skylark, which did wonders for my soul. In retrospect, I wonder if I knew what storm was coming for me less than a month later.

I spent my mornings reading and writing, my afternoons going for walks in the area, and my evenings stargazing. If there was a formula for resetting yourself, this might be it. You’re welcome. Now I need to message Liz and see when I can book my next session here.

Have you ever traveled for stargazing before? Been to Twizel? Keen? Let me know in the comments! 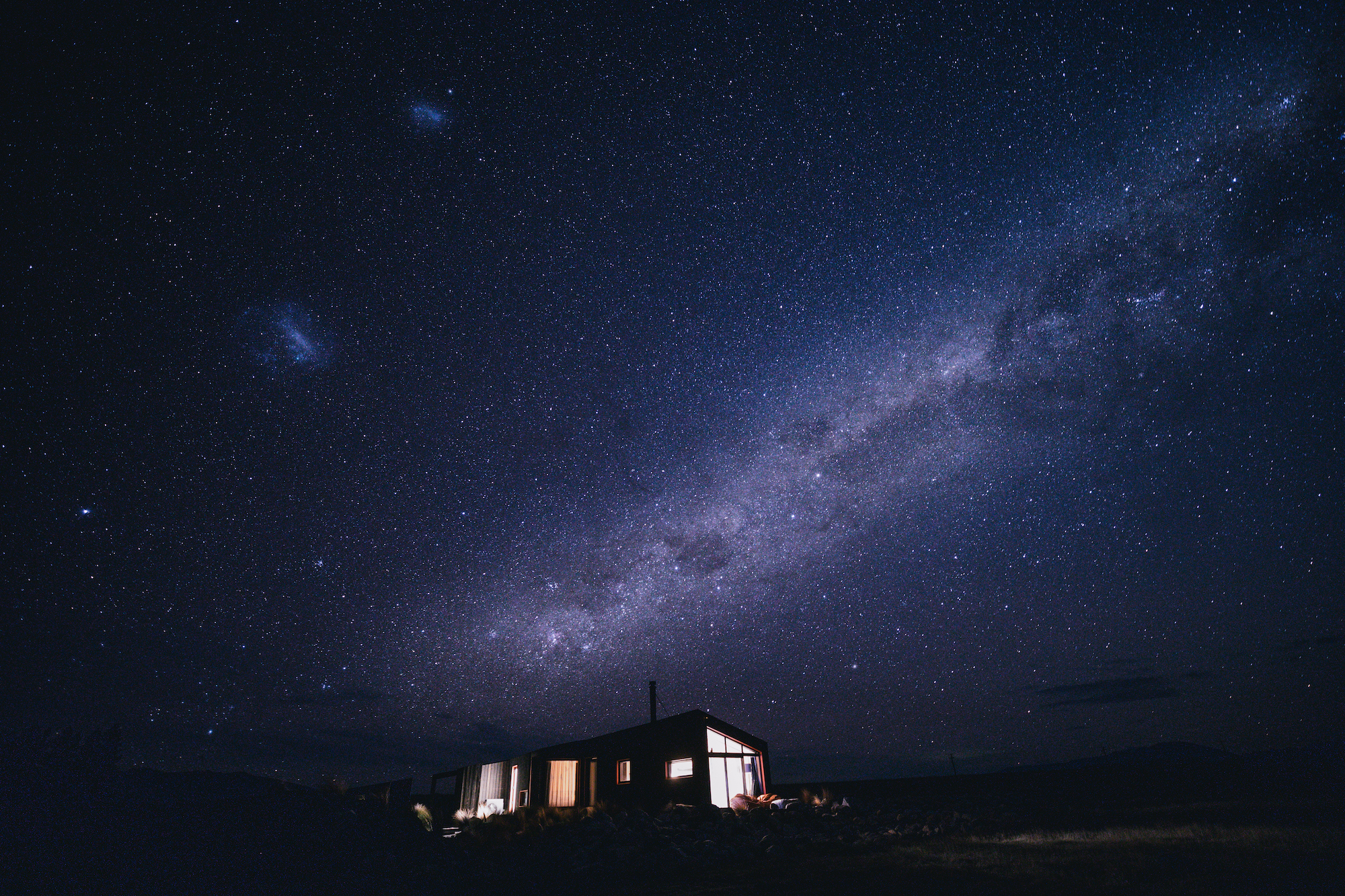 Many thanks to Skylark Cabin for hosting me in Twizel. Like always, I’m keeping it real. All opinions are my own, like you could expect less from me.

The post Skylark Cabin is the perfect place to watch the stars appeared first on Young Adventuress.

6 experiences you can only have on the Otago Peninsula

Magic happens when you have Milford all to yourself

No comments to show.

Easytravel.agency is a travel bookings adviser, comparing millions of deals on flights, hotels, taxis and activities, car rentals, visas, and much more to give you the best value possible. We do not sell tickets but deliver the best prices for you through our global partners.